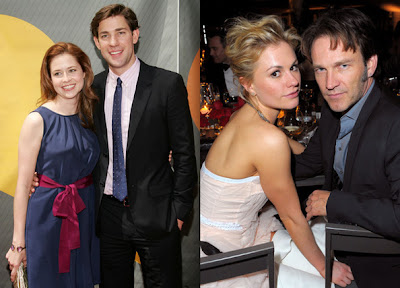 Friends is off the air, but now there’s a whole new generation of Ross and Rachel pairings to gush over. Keep clicking to check out some of the most beloved couples on TV today — we only wish they were all as cozy as Anna Paquin and Stephen Moyer in real life. click on read more option to see more 10 Photos...
1. Jim & Pam, ‘The Office'

From the first couple of seasons when they were tragically star-crossed, to blissful marriage and a baby, Jim (John Krasinski) and Pam (Jenna Fischer) are at the heart of every Office episode. Have two people ever been so perfect together? Ah, fiction.
2. Meredith & Derek, ‘Grey’s Anatomy'

What could be worse than coming into your first day of work in a new hospital and finding out you accidentally had a one-night stand with your attending surgeon? That’s what happened to Meredith Grey (Ellen Pompeo) and Derek Shepherd aka McDreamy (Patrick Dempsey), but they work through it, finally getting married in season five.
3. Don & Betty, ‘Mad Men'

Sure, Don and Betty Draper (Jon Hamm and January Jones) have had their ups and downs — and many infidelities — but we can’t help but hope this marriage lasts. After all, it’d be impossible for either of them to find a more attractive spouse.
4. Blair & Chuck, ‘Gossip Girl'

The love-hate (but mostly love) relationship between Chuck and Blair keeps the ever-twisting Gossip Girl plotline from losing it’s steam. The duo has been through love triangles, commitment issues and sex scandals, but the chemistry between the characters, played by Ed Westwick and Leighton Meester, is undeniable.
5. Sookie & Bill, ‘True Blood’

Telepathic waitress Sookie Stackhouse (Anna Paquin) fell for Bill Compton (Stephen Moyer) because she was unable to read his mind. The only drawback? He’s also a vampire. No wonder things get so spicy between these two — they’re engaged in real life!
6. Mitchell and Cameron, ‘Modern Family’

Mitchell Pritchett (Jesse Tyler Ferguson) and his partner of five years Cameron Tucker (Eric Stonestreet) are the source of tons of laughs on Modern Family, where they play a gay couple who constantly disagree about how to raise their adopted daughter. There’s only been one season so far, but we’re looking forward to more from this duo.
7. Rachel & Finn, ‘Glee’

She’s a bullied singing queen. He’s a popular football player — with a hot cheerleader girlfriend. But they find love through music and teamwork, and true romance prevails. Or does it? These two, played by Lea Michele and Cory Monteith, have been on and off, but Finn has vowed to win her back eventually.
8. Barney & Robin, ‘How I Met Your Mother’

The jokes and dares between Barney (Neil Patrick Harris) and Robin (Cobie Smulders) on How I Met Your Mother are good for some laughs, but their more sentimental moments are what keep viewers coming back for more. They’re off for the time being, but we have a feeling we haven’t seen the last of this couple.
9. Mike & Susan, ‘Desperate Housewives’

Mike Delfino (James Denton) and Susan Mayer (Teri Hatcher) have been married twice on Desperate Housewives, where the drama of Wisteria Lane is too much for most couples to survive. Although the neighborhood is filled with scandalous pairs, these two have remained fan favorites over the years.
10. Kate & Sawyer, ‘Lost’

There’s nothing like a plane crash to bring two people together, but Kate and Sawyer haven’t been without their ups and down. They clash in season one, hook up in season three, and then go on to romance other people, but the sparks between the characters (played by Evangeline Lilly and Josh Holloway) endure. Will they ever rekindle?
Via zimbio
vào lúc 9:58 AM