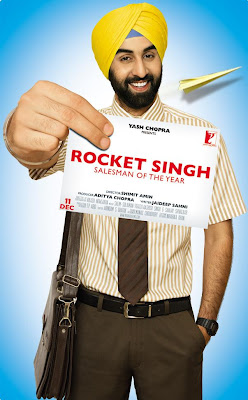 Today we share Roket singh movie review. Roket singh is new movie starring Ranbir Kapoor, in this movie he plays a role of salesman. Very touching light hearted movie which shows of he life of those individuals who scores average marks when they are students and after completion of studies they enter into sales filed after all tries of getting better job.

This is a tough story to tell and sell. Director Shimit Amin and writer Jaideep Sahani, who earlier collaborated on the excellent Chak De, are working here without any of the highs and lows of that film. The drama here is more restrained. The obstacles seem more ordinary. The characters are wholly believable.  Starting with the titles, Shimit and Jaideep create wonderful little details - so Harpreet's grandfather, played nicely by Prem Chopra, rattles off a check list before Harpreet goes for a job interview, which includes the question: motion clear hua.

A street side tea stall becomes the conference room of the fledgling company and even the telephone on Harpreet's desk has just the right amount of grime. But the trouble with Rocket Singh is that it never engages you fully. The first half is especially slow but even in the second, the film doesn't grab you by the gut.

There are long stretches in which the restrained story-telling becomes indulgent and topples over into sheer boredom. And there are several moments at which you wonder if this is more information about salesmen and their difficult lives than you ever needed. Finally then, it is up to Ranbir to carry Rocket Singh over its limitations and he rises to the challenge exceedingly well. The movie is produced by Yash Raj banner and directed by Shimit Amin and Starring Ranbir Kapoor, Sharon Prabhakar, Shazahm Padamse, Prem Chopra and Gauhar Khan