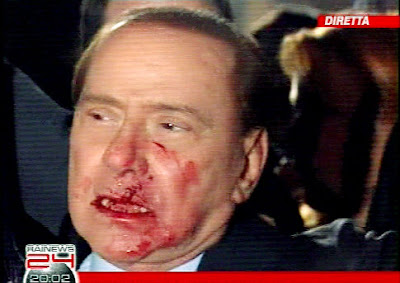 A mentally ill man broke Italian Prime Minister Silvio Berlusconi's nose and knocked two of his teeth out with a punch to the face at a rowdy rally in Milan Sunday.

Doctors said they will keep him in the hospital under observation for 24 hours. They said he was not badly injured.

It was not clear if the prime minister, who has confessed to having a face lift, will need more plastic surgery.

Italian TV showed the dazed premier - his face cut and his mouth a mass of blood - falling to the ground and then being hustled into a car.

The attacker, 42-year-old Massimo Tartaglia, a graphic designer with a history of mental problems, was quickly bundled away by police.

Berlusconi was gladhanding the crowd after delivering a tirade against the left at an evening rally in front of Milan's Duomo when he was hit.

Witness Doriano Riparbelli told Italian media that Tartaglia was holding a souvenir replica of the famously spikey cathedral and rammed it into Berlusconi's face.

Defense minister Ignazio La Russa, who also saw it happen, told the Corriere della Sera newspaper that the crowd was ready to lynch the attacker.

"Only scraps would have remained," he said.

Video of the aftermath showed a chaotic scene as crowds surged around the president, who is a hearty 73.

An aide was crawling on the roof of his limo as he was stuffed inside the car by security men.

At one point Berlusconi tried to climb out and hoist himself onto the car to show he was all right, but fell back, looking confused.

Distraught fans - some of whom appeared to believe he'd been shot - looked on in horror.

The Italian flair for drama quickly asserted itself.

"Democracy is at risk in this country," said Senate president Renato Schifani.

"There has been such a buildup of hatred toward the premier, and this is not good," Buonaiuti said. "This campaign of hatred has been building quite rapidly recently, and I am not surprised that what happened tonight took place."

Corriere della Sera said a handful of protesters heckled Berlusconi, shouting slogans that prompted him to tell the crowd, "They paint me as a monster, but I don't think I am one - firstly because I am good-looking and secondly because I'm a good guy."

Tartaglia was not among the protesters.

Berlusconi faces a number of bribery and corruption trials and has been caught up in a series of tawdry sex scandals.
His wife, actress Veronica Lario, announced in May she would seek a divorce amid allegations he was consorting with teenagers and prostitutes.

The Mail on Sunday in London reported that he spent Friday's European Union summit meeting doodling lady's underwear and then passing his sketches around to shocked world leaders.

The paper said Berlusconi drew a series of female undergarments through the ages - from Victorian bloomers to 21st Century thongs - as the leaders discussed climate change in Brussels.

Berlusconi -- a billionaire who controls many Italian institutions, including the football team AC Milan and major TV networks -- is the longest-serving Prime Minister of Italy, a position he has held three times since 1994.
source
vào lúc 12:01 PM