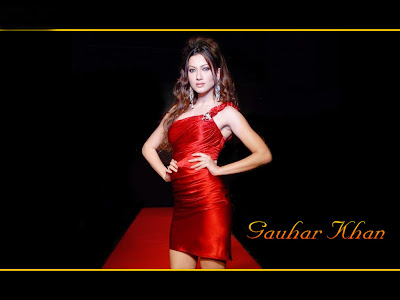 Model and VJ Gauhar Khan, who made her Bollywood debut in the Ranbir Kapoor starrer Rocket Singh – Salesman of.

The Year was so impressed by her co-star that she now wants to play his love interest on-screen. The debutante who was noticed for her turn as a crafty receptionist in the film, was all praise for Kapoor, who was recently crowned the ‘Sexiest Man Alive’ by People magazine.

“He is a calm and good person and a thorough professional. It would be great to be paired opposite him someday,” Gauhar told PTI. Though the lead opposite Ranbir is played by Shahzahn Padamsee, Gauhar says that she has most of her scenes with the heartthrob.

“Playing the lead does not mean being paired romantically opposite the hero but being an integral part of the film’s plot. Our characters shared a close bond in the film,” she said. The model-turned actress was participating in a dance reality show when she was called for auditions for the film.

“I went through five auditions before being selected for the role of Koena, a middle class girl, in the film. There were many layers in the character and I got an opportunity to showcase my acting skills,” Gauhar said. “Filmmaker Yash Chopra complimented me for my performance and that was the icing on the cake amid all adulation and good reviews”, she added.