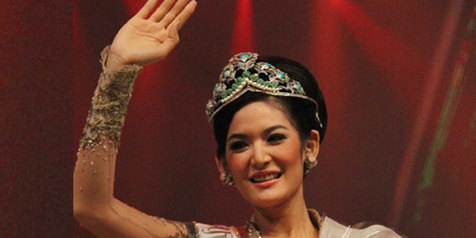 Puteri Indonesia contestant from Central Java, Mary Selena would not previously have thought was elected Miss Indonesia 2011. He just surrender to God, after following every step of the annual event.

"My feeling is extraordinary at all. I really did not expect. I was targeting the Puteri Indonesia 2011, but since I surrendered to God and ask for the best, yes this grace given to me.

From me in quarantine, I'm pretty sure since the days of quarantine, I am very confident and very sure until tonight, "said Maria after crowning himself into Puteri Indonesia 2011 in JCC, Senayan, Jakarta, Saturday (8 / 10) morning.........
At that time, she says not yet have the vision and mission for their programs later. The reason there has been no talks with Miss Indonesia Foundation (YPI) which has been responsible for the activities of Puteri Indonesia over the next year.

"In here, until I became Miss Indonesia, I was about to start programs that will be given by Yayasan Puteri Indonesia, therefore I do not know the future," said Selena .

While one can imagine, its activities in the future not far from the senior, who engaged in many social activities, education, health, social and cultural and tourism

"There must be, we will follow the social activities, the social institution whether it be in education and health, social and cultural as well as tourism," she concluded.
vào lúc 5:58 PM