Diana Vickers, Pixie Lott and Taylor Momsen rock the stage in raunchy outfits at V Festival - Battle of the blondes

According to Dailymail, It was a battle of the blondes at the 15th V Festival today as singers Diana Vickers, Pixie Lott and Taylor Momsen both took to the stage sporting racy outfits, albeit at different venues. The festival is split across two sites - Hylands Park in Chelmsford, Essex, and Weston Park in Staffordshire, with acts playing a set at one before dashing to the other the next day.

Fans at both sites received a treat today as the strong line-up got underway.

Battle of the blondes: Diana Vickers wore an amazing zebra-print dress at Hyland Park while Pixie Lott wowed the crowd in a tiny feathered skirt at Weston Park and Taylor Momsen also donned a racy outfit for her performance in Chelmsford.........

At Weston Park British songstress Lott, 19, belted out her hits in a tiny peacock-coloured skirt with feathers and a matching garter.

Lott was clearly excited to be performing at the festival, tweeting to fans that she was the only female act to appear on the main stage this year.

Meanwhile at Chelmsford, Taylor Momsen, the 16-year-old American rock chick who made her name in Gossip Girl, fronted her band The Pretty Reckless while also choosing racy leg gear, but this time in the form of suspenders. 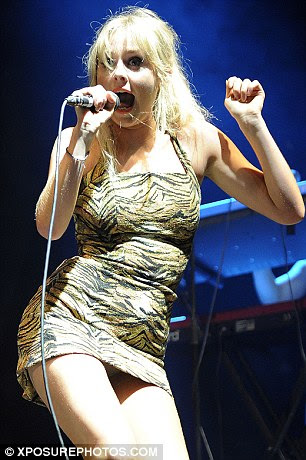 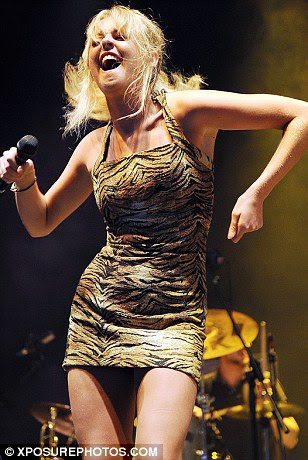 Energetic: Diana wore a tight printed dress as she performed an energetic dance routine on stage

She teamed the look with a sheer, lingerie-style dress with gold detailing, which clearly showed her black underwear.

The blonde singers looked years older than their 19 and 16 years respectively in heavy eye make-up.

But it was former X Factor star Vickers who really stole the show in a tight zebra-print dress as she made the most of her performance in Chelmsford by performing a highly energetic dance routine.

Also performing today was Peter Andre, who arrived on stage in a leather jacket, jeans, two studded belts, and aviators.

He performed a series of new music as his back-up dancers gyrated around him. 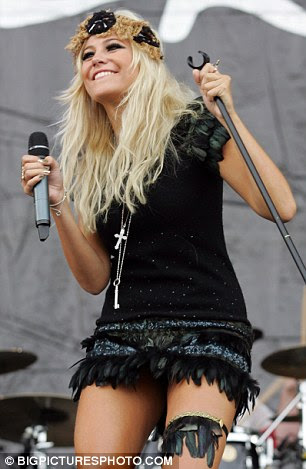 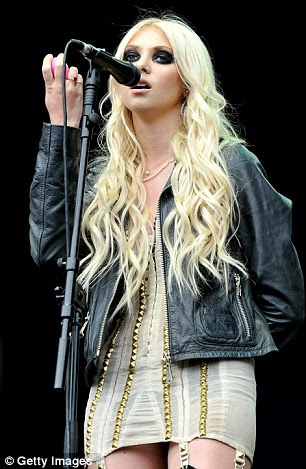 Still to come are festival headliners Kasabian, who play Staffordshire on Saturday then Essex on Sunday, and American rockers Kings of Leon, whose appearances mirror that of the Leicester indie band.

Other artists on the bill include Stereophonics, Florence and the Machine, Paul Weller, Madness, Shed Seven, Ellie Goulding, Faithless and Chase and Status. A-lister Drew Barrymore and her co-star and former boyfriend Justin Long are also expected to attend as the pair are in the UK to promote their new film, Going the Distance.

The only downside of the event so far has been the grey skies. Weather forecasters said temperatures would continue to be mild all weekend with the possibility of thunderstorms at Hylands Park on Sunday, advising revellers to be armed with both sun-tan lotion and wellies.

Tickets for the festival sold out within 90 minutes of going on sale, meaning 155,000 music lovers are expected across the two sites. 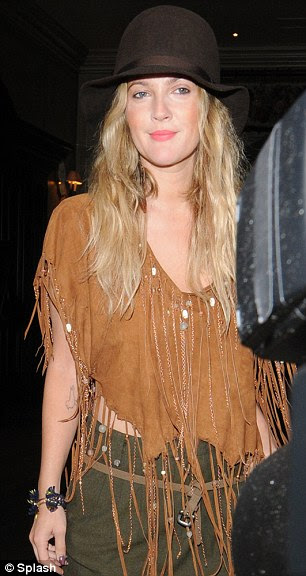 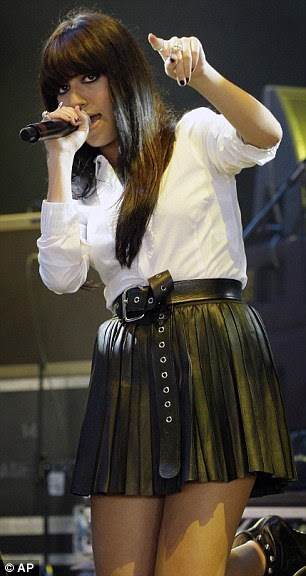 Festival chic: Drew Barrymore leaves her London hotel en route to the festival while Gabriella Cilmi, right, went for a schoolgirl style look for her performance