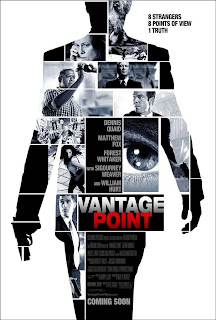 Synopsis:Thomas Barnes and Kent Taylor are two Secret Service agents assigned to protect President Ashton at a landmark summit on the global war on terror. When President Ashton is shot moments after his arrival in Spain, chaos ensues and disparate lives collide. In the crowd is Howard Lewis, an American tourist videotaping the historic event to show his kids when he returns home. Also there is Rex, an American TV news producer who is reporting on the conference. It''s only as we follow each person''s perspective of the same 15 minutes to and immediately after the shooting so that the terrifying truth behind the assassination attempt is revealed.