Vega Darwanthy Ngantini , she have an original name Ngatini, she born in Jakarta, March 12, 1986 was one waitress who often interact with Tukul at Four Eyes. Vega had been a great 35 AFI 3. Since his name is known as the sassy at Four Eyes, a number of jobs started flowing to him. 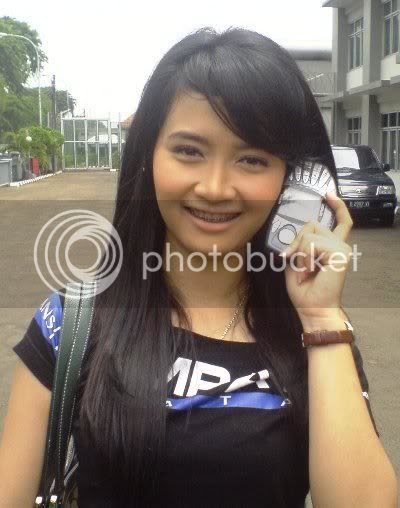 ''I am often able job of singing Tukul mas. Many are surprised because it turned out I could sing. Once knew I could sing, was more enthusiastic audience response. I became more and more the spirit sang,''Vega said that despite claiming he had failed in the AFI was grateful for sustenance comes through Four Eyes.

Not only job that is now coming singer. He was very excited having just signed a contract to be advertising stars Kuku Bima. Shooting''was completed, together with my same-same ya mbah Maridjan Rieke. He said the hell would begin showing up May 1,''Vega said that was contracted for one year by Sido occurs, producers Kuku Bima.

Together Dianovita addressed by Tukul Ngatiyem, Vega following the casting through the agency where shelter. Although only a role as a servant but he was very pleased, thanks to the role that his name began to be recognized.

Often''if the streets in the mall, I was called-called Ngatini. I wrote it surprise me a lot is known right now,''Vega explained that joined since the first episode.

He claimed that remarks made really a spontaneity. Moreover celetukannya always responded well by Tukul.

''I do not feel slighted. I've keceplosan say. That's because really getting carried away. After filming I reprimanded producer. After that I was more cautious,''said Vega is very nice to finally get involved in the Four Eyes
vào lúc 12:18 PM